There has been a Medium post floating around recently that attempts to shed a light on the startup capital landscape in Austin. I hope that you find this (my first ever blog post) to be a helpful alternative perspective on early stage investment in Texas through the lens of a practicing venture capitalist.

The blog post starts by mentioning an offer of investment from an Austin based “venture capital firm” (emphasis added by me). My partners and I have been investing in early stage companies in Austin for over 15 years now and have worked at or with most of the Austin based venture capital firms of relevance and we cannot imagine any one of them asking for those terms. Anyone that has participated in building a successful early stage company knows that highly punitive terms like that leave little incentive for the team to succeed and last I checked owning 100% of zero is still worth zero. So, I suspect there is a bit of a liberal definition of “venture capital firm” there. Since the only active firms cited in the article are LiveOak and Silverton, I want to be explicit that LiveOak has never done it and I am confident neither would Silverton. I don’t doubt that Richard did receive terms like this, but I can’t imagine it was from one of the large venture capital firms in Austin.

A couple more factual observations that influence the article’s conclusions and then I will address the bigger themes:

As I read the post, there were a few mischaracterizations that struck me and I want to address:

Let me tell you a bit about these so called later stage deals in our portfolio:

I haven’t analyzed other firm’s portfolios but I would be surprised if you find this to be different in Silverton’s portfolio. The local firms ARE taking mostly early stage risk!

While it is true that doing a seed deal that might take a long time to mature is easier in the early stages of a fund, this generalization is just plain wrong.

While I whole heartedly support the argument that Austin (and more broadly Texas) needs more local early stage capital, I take issue with the conclusion and the causality assigned to it.

So where are we in the macro venture capital cycle for Austin and broadly Texas: 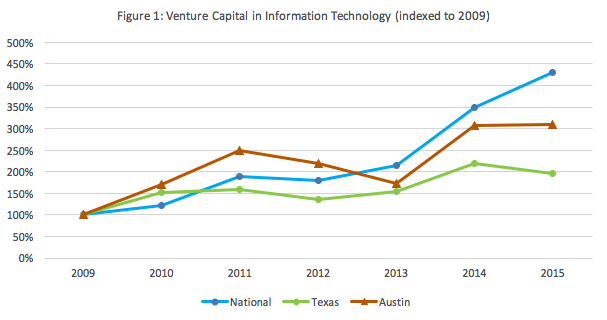 While it may seem like the “Dark ages of Austin’s startup capital”, having been in the business of providing it for the last 15+ years, I will end with these perspectives: